Partner and Co-Chair of the Discrimination and Harassment Practice Group 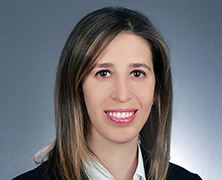 Spending time with friends and family, Pilates, and travel

Breaking Down the Maternal Wall

I gave birth to my daughter on March 9, 2020, just as the pandemic, and its distinctly gendered impacts, began raging. I have long been passionate about promoting women’s rights and dismantling gender-based barriers. It’s what led me to minor in women’s studies and immerse myself in feminist organizations in college. And it’s what inspired me to become an employment lawyer.

But parenting transformed my passion for women’s rights from something that was relatively abstract to a deeply personal mission. On the playgrounds and in parenting groups, I’ve heard from mothers who were cruelly terminated right around the time they gave birth. Termination shouldn’t be the hallmark of matrescence, but it is all too common an occurrence.

While we often talk about the “glass ceiling” that needs to be shattered, a corollary to that glass ceiling is “maternal wall bias.” The latter refers to a form of bias rooted in discriminatory assumptions about mothers as less competent, less capable, and less committed. This bias affects women in all sectors and at all levels of the workforce. For many women, the proverbial glass ceiling is not within reach to shatter because maternal wall bias derails them first.

Modern-day discrimination frequently occurs in subtle ways, with employers resorting to covert tactics. But, as I have seen with many of my clients, maternal wall bias often manifests itself in unvarnished directives to mothers: Stay home. Forgo travel. Have a “work-life balance.” Spend time with the kids. These directives are commonly invoked as excuses for promotion denials and demotions. Whether animated by outright hostility or paternalistic benevolence, employment decisions stemming from such bias have devastating consequences. They prevent women from providing for their families. And they thwart women from advancing through the ranks, often pushing them onto the “mommy track” or out altogether.

Women around the country are courageously stepping up to challenge discrimination in their workplaces and hold their employers accountable. I am proud to be part of this fight. But we need action from policymakers and employers too. To uplift mothers in the workplace, we need systemic changes. We need paid parental leave, a stronger childcare infrastructure, and robust laws to combat the motherhood wage penalty. We also need employer action. It is on employers, not only women employees and their lawyers, to eradicate maternal wall bias and build workplaces that truly support caregivers.

As we emerge from a pandemic that drove millions of women out of their careers—and disproportionately affected women of color—it is imperative that we rebuild equitably. Let’s together commit to smashing gender norms, tearing down the maternal wall, and shattering the glass ceiling.