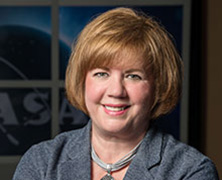 Figure it out. Don’t spend a lot of time worrying about a challenge. Figure out where to start and press – you’ll get more done.

Melanie Saunders plays a critical leadership role as associate director of the NASA Johnson Space Center, where she manages nearly a third of NASA’s total procurements. Saunders’ keen business sense and operational perspective have established her as a key player in defining the future of NASA’s business services. She works to advance the NASA mission by building coalitions with universities, industry, other government agencies and international entities.

Saunders oversees a team of more than 14,000 employees and the management of fiscal resources worth approximately $5 billion. During her 23-year tenure with NASA, she has served in a variety of roles, including associate manager for the International Space Station program. She describes being part of the team that built the space station as her greatest professional accomplishment to date.

Saunders demonstrates her dedication to the NASA workforce by serving as chair of the agency’s Inclusion and Innovation Council, promoting diversity across programs and being an advocate for employee engagement. “Diversity and inclusion create an environment where each employee’s passion is ignited,” she explains. “So instead of people just meeting their job requirements, they are energized and excel. Everyone contributes more to the mission.” She sums up by stating that diversity and inclusion lead to better problem solving because, “All of us together are smarter.”

A highly sought-after mentor, who has mentored many of NASA’s current and upcoming leaders, this mother of triplets serves as an inspiration to the next generation of women and demonstrates that it is possible to have a full family life and a successful career.

Saunders urges women, “Don’t spend a lot of time worrying about a challenge. Figure out where to start and press – you’ll get more done.” She goes on to explain, “Men tend to apply for jobs they will be qualified for once they’ve been in them awhile. Women tend to apply for jobs they are fully qualified for. Have confidence in your ability to learn and adapt. Lean forward and take a chance! An old swim coach used to tell me, ‘Put your head down and go’.”