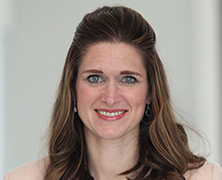 I love helping others find success and build confidence, which is why I have been devoting my time to a new Podcast & Community, The Co’Lab. I also love to garden & cook, spend time with my family, and travel.

Sacred Success: A Course in Financial Miracles by Barbara Stanny; Exactly What to Say: The Magic Words for Influence and Impact by Phil M. Jones

I have spent too much of my career talking to women who control all of their household spending and budget, but still take a backseat when it comes to investing, finances, and budgeting a business. Men still run that world, but only because young women have not been taught that we could and should want wealth and power.

Instead, we fall prey to the “Mommy Tax,” even before we decide to have children.

After working harder than I thought possible for ten long years, building a brand, a team, and a company, the owners decided to merge with a larger firm. Overnight, I was the only woman on the management team and got hit with the Mommy Tax.

This tax isn’t just about 12 weeks of unpaid leave to have a child or the additional expense of raising children. It’s also about the opportunity-cost career moms pay in the form of lost promotions, lost raises that go to those who can work longer hours, and being left out of the weekend leaders’ circles. It is the unconscious assumption that we won’t want the grueling assignment or the overnight trip; it’s the unconscious bias that believes once a woman has a child she won’t be as dedicated to her career.

Women in the workforce are watching opportunities flow to those who are less qualified and then watching them get paid more just because they aren’t mothers. The same thing happens when women go to get business financing. Defeating this double standard has been a driving force in my career.

There are currently more mothers working than at any other time in our history. Most families can’t make it if the mother doesn’t go back to work. As a friend of mine said, “The days of my income not being as important as my husband’s are over.”

But it’s not a level playing field. Women in the U.S. made an average $41,000 annually, whereas men averaged $52,000. At the same time, the wage gap between working mothers and childless women under 35 is now even greater than the gap between men and women overall.

Today, women are starting businesses five times as often as men, but in 2018 they captured only 2.2 percent of the $130 billion given out in venture capital. And that was a $1 billion improvement over the prior year. On the debt-funding side of things, a Lendio study found that only 24 percent of the businesses accessing capital in the past year were owned by women.

By helping women understand the financial resources available to them, I’m empowering them to change their lives and helping all the little girls and women out there finally avoid the “Mommy Tax.”