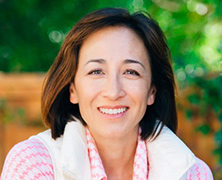 American Radical: Inside the World of an Undercover Muslim FBI Agent by Kevin Maurer and Tamer Elnoury; Drive by David Pink; Customer Centricity by Pete Fader (Re-read this often!); The Happy Human: Being Real in an Artificially Intelligent World by Gopi Kallayil

I washed eight cars a week during my elementary school summers—$5, inside and out. I'd go to the Sanrio store on Fridays to scout out the latest Hello Kitty goods!

Human Options. The way in which they support women and children of domestic violence is inspiring.

We Can Empower Ourselves and Each Other

Women are often their own harshest critics—hard on themselves and each other. At times, it’s nearly impossible for us not to fall victim or become complacent to the societal inequities that have spun out of control over the centuries. It’s crucial, however, for us to rally together and empower one another. The adage “You’ll never regret being kind” has never been so true—despite the fact that I found it embroidered upon a pillow at HomeGoods.

In the wake of the #MeToo movement, however, we all need to keep in mind that it’s not just some passing trend. It’s part of a long-term stand for dignity, respect, and the sanctity of a safe work environment. It’s an alliance that ensures parity in the workplace and in society.

In the 1980s, my mother endured one of the worst #MeToo scenarios imaginable. Hers was one of the first sexual harassment cases in the U.S. And by fighting back, she demonstrated unprecedented courage for the time—blazing a previously impassable trail. But God and my dad stood by her side in the deepest and darkest depths of the journey.

My mom was a Chinese woman working at a Chinese bank in Los Angeles. At the time, I was too young to understand the complexities and hardships she faced as a Chinese woman in the workforce. Today, the lessons she passed along to me have reinforced my strong belief that women CAN do anything. And, we can do it all with grace, strength, humility, and courage. As a result of her experience, I gained the resiliency and tenacity necessary to stand my ground and lead as a female minority executive in a growing company.

I urge men and women today to support their female peers and to remember that they will “…never regret being kind.”