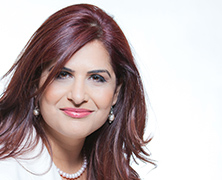 Meera Kaul is an example of a woman who has come into her own on her own. Her journey as a woman in STEM is opening a path of possibilities for women and her perseverance as a force for women’s self-realization and success in all their capacities.

Kaul’s first startup on content curation was created during her freshman year as an undergraduate in 1990, distinguishing her as a pioneer before the dotcom era. She sold that startup to fund law school and then taught herself coding while studying law in Delhi and creating another startup that would build interactive platforms for global media giants, including National Geographic. As a postgraduate at Thomas Jefferson School of Law, she built a wealth management startup that used technology to enhance processes and was purchased by Charles Schwab in 1999.

Today, Kaul is on the board of and advising tech startups as part of her own growth process and steadfast contribution to ensuring women learn and stay in science and technology. She is the founder of the largest global Women in STEM program, and serves as a model of dedication and perseverance. She is also the founder of the Women Inclusive Network(WIN), that uses technology to safeguard women rights and is building the product in conjunction with Silicon Valley veterans to disrupt the dependence of women rights on government grants.

In the words of Meera Kaul:

Where do you see women in STEM in five years?
“As long as we remain steadfast in prioritizing and investing in women’s programs and compelling girls and women to be proponents of growth in our economies, I am convinced that women will take the lead in STEM.”

What barriers are in the way to closing the gender gap in STEM?
“Gender equality and the barriers to it are multidimensional assuming economic, cultural and social dimensions. The complexity of the gender gap in STEM does not lie with women but with men. Stereotypically, women have been anticipated to perform most of the work in the home, irrespective of which partner is most suited to the task. Indeed, the greatest obstacles regarding girls and women’s involvement in STEM are socioeconomic.”

What can be done to move women forward in STEM?
“In order for women to move forward in STEM a number of policy and socioeconomic changes should transpire. Government policies should amalgamate with that of the private sectors, especially on issues such as pay parity, anti-discrimination initiatives, and corporate board and management diversity. Further elements that need to work in tandem to promote women’s engagement in STEM include a transformation in perceptions and attitudes at home, in the media and in our education systems. When we are successful, one of the main aspects to bear in mind is that it is not merely about getting women involved in STEM fields – it is about nurturing them, honing their skills and keeping them intrinsically interested and invested – therein lies a main challenge.”