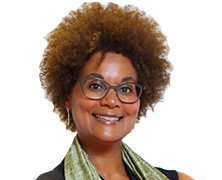 Hopeful pessimism: expect the best, prepare for the worst.

The Stone Sky by N.K. Jemisin

Rides operator in Kiddieland at the Pacific National Exhibition

Grant Me the Courage

My grandmother had a number of framed, inspirational prints on her wall. These texts likely represented her views, and those of many, on how to live a good life. There was one that I read repeatedly as a child, and heard or saw again many times as an adult. Even before Facebook and other social media platforms adopted the inspirational saying as a meme, this was one of the most clichéd of messages. It said, “Grant me the serenity to accept the things I cannot change, the courage to change the things I can, and the wisdom to know the difference.”

As a biologist who happens to be a black woman, I took this approach for most of my early career. My focus was on science, on teaching, and on mentoring my students. These are things I had spent 12 years in post-secondary education preparing to do. I still think this is a reasonable approach, and it is one I highlight as a path for those who, like me, are often “the only one in the room” in their chosen field. Do what you need to do to be happy, to succeed, and to cultivate the connections that help you to be resilient.

But now as a full professor, I have started to question whose wisdom tells us that we cannot change certain things. My path is now centered in the risk inherent in speaking out, and in helping others to see and work with me to correct disadvantage. I agree with Angela Davis, who took the serenity prayer as an invocation to passivity. Davis morphed it into something powerful, saying, “I’m no longer accepting the things I cannot change, I’m changing the things I cannot accept.” As a leader, it is my goal to live this sentiment, and to allow my serenity to wait until after our collective courage has affected change.