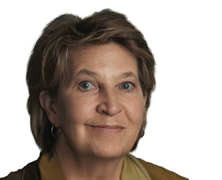 Make frequent checks with the moral compass you carry inside and you will move through your days with peace of mind and comfort.

My father was a feminist long before it became a household word. A lawyer and a parent to several daughters, he took deep pride in our achievements and loved to see us compete.

My mother, after raising seven children, completed a journalism degree and started her professional career as a newspaper reporter at age 55. She found each story a new adventure and continued in her role at the paper until she was nearly 80.

Their examples shaped my perspective, teaching me to pursue what I love and to pay little attention to traditional boundaries. Achieving my goals through hard work is an attitude that helped me as an attorney in my first job out of law school and one that stays with me today in my role as General Counsel at Allianz Life.

The business world has changed significantly since the early ’80s. Many hurdles women encountered in traditionally male-dominated professions no longer exist. For example, I was the first attorney at my law firm to have a child. The mere “novelty” of such an event at times attracted more attention than I wanted. But I did my best, loved it, and quite frankly, I didn’t have much time to think about it.

The lessons taught by my mother gave me the confidence that hard work and focus could produce both professional opportunity and healthy, well-balanced children. With the help of a few incredibly forwardminded bosses and mentors, and an amazingly supportive and confident husband, I was able to achieve a level of balance that allowed for success at home and at work.

Even then, I understood that my accomplishments would not have been possible without the guidance from strong mentors. One thing that stood out was the give-and-take nature of those relationships. When mentoring is regarded as a two-way street, it becomes as much about listening and taking as it does about giving.

And so today, I focus on building that connection with young people, whether male or female, so I can better understand their unique perspective, and continue to learn from them in the process. Whether it’s something I have direct experience with, such as the challenge of raising children while remaining in the workforce, or something where I can only lend a supportive ear, the key is sharing equally, and continuing to learn together. Truly sharing our experiences is the most effective way to pay it forward.