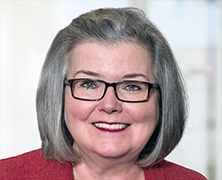 The Ninth Hour by Alice McDermott

Don’t Let Fear of Failure Keep You from Success

Almost everyone who knows me, even close family members, would be surprised to hear me admit that, after practicing law for many years, including serving on the firm’s Executive Committee for the past year, I still suffer occasionally from the “Impostor Complex” and a fear of failure.

Although I’m not prepared to say that women fear failure more than men do, I think many of us tend to let fear of failure stop us from accepting challenging opportunities. My view is that this fear of failure is due, in large measure, to societal stereotypes about what women can or should do.

Thankfully, attitudes are changing. But for women who have achieved a measure of success in their careers, fear of failure can stop them from getting to the next level—going after a major matter or a promising client, accepting administrative responsibilities, or navigating the politics of the practice of law. Ask yourself this question, “If I don’t try to grab the brass ring and opt instead to stay in my comfort zone, what will I ultimately achieve?”

Failure is not the enemy; no one grows or succeeds without having failed—usually more than once. You will fail; accept that fact, because it is very liberating. Treat failure as a learning experience that will enable you to meet and overcome the next challenge. View it as an opportunity to examine what happened, and why and how you can avoid the same pitfalls in the future. Your fight is with the fear of failure, not failure itself.

The next time you’re tempted to decline a seat at the table, think about who invited you and why. A client only wants the best lawyer to handle its significant matters; partners don’t solicit weak links to participate in pitches and firms don’t offer leadership positions to partners who aren’t up to the job. So, before you say no, think about the confidence others have expressed in you and go for that brass ring; it’s guaranteed to be the first of many.