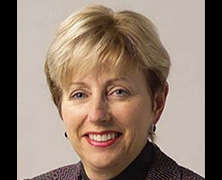 I enjoy gardening for relaxation and golf for frustration.

The person who succeeds in life is willing to apply herself to the work at hand, do more than her share, treat others fairly, listen well, and learn from mistakes.

I just re-read Under the Tuscan Sun as a preview to a trip to Italy.

During college, I worked in retail stores but went into banking as my first ‘real’ job.

When I started in banking, I invested a lot of time in building a network. I got involved in things, whether it was organizing the employee picnic or leading the company’s United Way campaign. Joining associations and community groups put me in places where I could meet business professionals. Two things happened: I became known out in the community; and I got to know the decision-makers, the influential people who were out there getting things done. I enjoyed networking, but it also laid a foundation for my future success, paying off tenfold in contacts for my career advancement and business relationships. Today I have people across the country I can call for advice. I also remember networking is a two-way street, so I always make time for people I have known who call me seeking some counsel.

My career was definitely aided by many trailblazing women in business and banking before me, but I was always alert to opportunity. When I left my first employer after 18 years, it was because management still saw me as I was when I started, rather than what I had become. I wanted to go to a company that would continue to invest in me and, likewise, I could invest in them. I also chose at one point to move from staff to sales, which has more risk but also more reward and recognition for your accomplishments. When I changed positions, I was concerned whether my expertise would go with me, but it was a freeing experience. You find that you truly carry with you certain skills, and you also discover skills you didn’t even know you had until you put them to work in a different setting.

Think of yourself as a corporation, with skills and assets that you have to sell in the marketplace. Don’t settle. Never underestimate yourself even if management does. Just because one company doesn’t see you as an executive doesn’t mean you are not one. Find the place that values you and take a chance.

Picture yourself in the job you really want, not the job you’re in. Paying attention to how executives around me managed, made decisions, and interacted with others helped me model that behavior. People at decision-making levels must be able to visualize you in a leadership role. I’ve always subscribed to a famous quote by Wilma Vaught, who retired from the Air Force as a brigadier general well before women were in these kinds of roles: “I wasn’t sure what I wanted to be when I grew up, but I knew that I wanted to be in charge.”