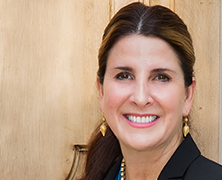 Legacy of Law and Public Service

On career day, sixth-grader Marjorie McKeithen took her grandfather’s briefcase to school and told her classmates that she was going to be a lawyer with him when she grew up. “I really never considered anything else,” McKeithen said.

Today, she’s a partner at one of the largest law firms in the United States, Jones Walker LLP. She has embraced and expanded a family legacy of public service and commitment to the community, while blazing her own trail of professional and personal success.

Her colleagues describe her as a dedicated, innovative public servant, a voice of reason in times of crisis, and a bridge builder who has helped public officials, corporations, trade associations, environmental groups, and concerned citizens find common ground and achieve shared goals.

“As state officeholders, my father and grandfather were known for their ability to reach across political divisions,” she said. “From them, I learned that public service is a high calling and that working together can achieve the greatest good for the greatest number. Above all, I was never told that being a woman would stand in the way of pursuing and achieving my goals.”

A graduate of Louisiana State University with a B.S. in petroleum land management and a law degree, she built a successful litigation practice before turning her attention to the Gulf Coast energy industry. She co-chairs the firm’s Energy, Environment and Natural Resources Team.

McKeithen was appointed back in 2006 to serve as an Assistant Secretary at the Louisiana Department of Natural Resources and as Secretary for the Louisiana Mineral Board during the Haynesville Shale boom, the largest mineral leasing volume in the state’s history. In that capacity, she played a major role in bringing new investments to the state. Shortly after the Deepwater Horizon oil spill, she helped facilitate initiatives to bring together state government, federal regulators, and business leaders, resulting in a path to safely lift the post-spill federal moratorium on offshore drilling in the Gulf of Mexico.

From her deep involvement in the Katrina Krewe neighborhood cleanup movement, to helping the Women of the Storm organization ensure funding for coastal restoration, McKeithen is a tireless advocate for the disadvantaged, underserved, and unrecognized.