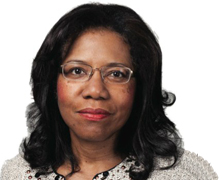 To those whom much is given, much is expected.

What the Dog Saw, by Malcolm Gladwell

I am the only child of first generation immigrants. My parents emigrated to the United States from Kingston, Jamaica; at the time my mother was nine months pregnant. My parents were professionals in Jamaica but were not able to work in their chosen fields in the United States.

My mother worked as a nurses’ aide for 35 years and my dad worked as a mechanic. Although they were trained professionals, I never once heard my parents complain about the work that they were forced to do in this country. They instilled in me that all work is honorable if it is honest and done well. Also, because my parents came from a country without free public education, they viewed the ability to get an education as a privilege instead of a right. There were dire consequences for bringing home any grade lower that an “A.”

Two adages explain my career philosophy: “There is no excuse for anything less than excellence,” and “Showing up every day is half the battle.” All of the successful people that I have met throughout my career share that commonality. They were tenacious and they refused to accept anything less than excellence from themselves and those around them.

I have been fortunate to be mentored by people who saw potential in me that I did not see in myself. When I joined ITW 12 years ago, I had never worked on an acquisition. In the last 12 years I have completed over 100 acquisitions with acquired revenues in excess of $ 4 billion. This is possible because I had a mentor who was willing to take a chance on me.

As a mentor I have tried to do the same for others by helping them realize their full potential. Some of my best mentoring experiences have been hiring and working with people who did not appear to be a perfect fit for a job but who worked hard and grew beautifully into a “stretch” position. Those of us who have been blessed with opportunity have a duty to reach back and help others. I am also passionate about social and civic causes. Despite the demands of career and family, it is imperative that we share our time, energy and financial resources with the less fortunate.