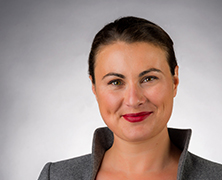 Manuela Papadopol is on the cutting-edge as one of a handful of women in senior management positions in automotive technology.

As director of business development and communications for automotive software leader Elektrobit (EB), she’s devoted her career to advancing automotive technology. Her colleagues say she’s a tireless ambassador for the industry as it evolves toward highly automated features and, ultimately, self-driving cars.

With automotive software being the single most critical component for the self-driving cars of the future, Papadopol is breaking new ground for women daily in the auto industry as she builds relationships with leading automakers including Audi, BMW, Daimler, Ford, GM, Volkswagen Group, and Volvo.

During her previous tenure as Elektrobit’s director of global marketing, the company dramatically expanded its global marketing presence with 24 percent year-over-year growth. In addition to a greater presence in the Asia-Pacific and North American markets, Papadopol’s efforts were instrumental in establishing Elektrobit’s Silicon Valley Innovation Lab in 2015.

Her career advice is to leap before looking. “Don’t question yourself,” Papadopol said. “Instead, analyze, but don’t over-analyze. It has definitely helped me over the years.” She says it’s imperative for a woman leader to have conviction. “Have a strong vision and the willingness to see it through. If you want your team to produce quality results, you need to lead by example,” she said.

Papadopol is an active member of Women in Automotive Technology, an organization created to connect, educate, and drive the future of the automotive industry by creating programs, community, and events for women automotive technologists in the United States and Europe. Before joining Elektrobit, she was the global marketing manager for automotive programs at Microsoft, where she helped establish SYNC powered by Microsoft as a benchmark for automotive infotainment.

She holds a BS in marketing from James Madison University, Bucharest Romania and a post-graduate certificate in public relations from the University of Washington. She also holds a patent in voice-activated acquisition of non-local content.