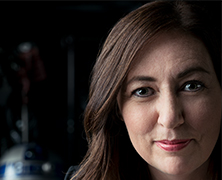 Lynwen Brennan is a driving force for creativity, collaboration and synergy who is leading cutting-edge endeavors at one of the world’s leading entertainment companies. She lives by the words of Mahatma Gandhi, “Live as if you were to die tomorrow. Learn as if you were to live forever.”

As general manager of Lucasfilm, Brennan creates a culture that fosters creativity, leadership, inclusion, and world-class service. She has a keen sense of community and culture coupled with a unique combination of business savvy, creative and technological instincts, and a genuine passion for people.

Brennan oversees its operational matters, as well as those of Industrial Light & Magic and Skywalker Sound, including development and execution of business strategy and company vision. She was integral in the creation of ILMxLAB, a new division combining the talents of Lucasfilm, ILM and Skywalker Sound to break new ground in creating interactive storytelling and immersive entertainment experiences.

She has held multiple leadership positions, knows how to manage creative talent and fully understands the intricacies of production. “Everything is possible with effort and integrity. Always be the hardest working person on the team and always treat everyone with respect – no matter who they are,” Brennan said

Earlier this year, Brennan was awarded the honor of Commander of the Most Excellent Order of the British Empire on behalf of Her Majesty Queen Elizabeth II, for services supporting the visual effects industry in the UK.

She is a member of the Academy of Motion Picture Arts and Sciences and the British Academy of Film and Television Arts.

Prior to joining Lucasfilm, she spent a decade in visual effects software development at various companies including Parallax Software, where she was a founding member.

She serves as a Studio representative for the company-wide women’s initiative, sponsors Women in Animation, and passionately supports the education and development of female artists and engineers.  Her favorite charities include St. Jude’s Children’s Hospital and the ASPCA.