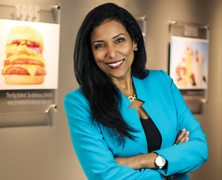 Grow where you're planted.

"Everybody's Got Something" by Robin Roberts

I was raised by a single mom who demonstrated in her words and actions the importance of a job well done. She would say, “Don’t wait for someone to tell you what to do. If you see something that needs to be done, do it. If you see someone who needs help, help them.” While I didn’t realize it at the time, it is clear, when I look back, that this was the advice that propelled me forward at each major point in my career.

While a recruiter at Disney, I could see that the process we were using to hire diverse talent wasn’t working well, and was becoming a major pressure point for my director. I created a new process and built the case for a change. Ultimately, I was asked to execute the new process and given my first managerial role. It was extremely successful and allowed others to see me in a new light. My director was very pleased, and continued to broaden my scope and responsibilities.

Joining Walmart as a recruiting manager meant building a reputation in the world’s largest corporation. Again, I focused on solving problems that mattered to leaders. One vice president I helped was promoted to CIO, and made me her HR director. Even though I had limited HR experience, I had earned her trust. Together, we created a “People Strategy” and tools that were recognized among her peers as best-in-class. She was thrilled and became my biggest advocate.

So, my advice is to step up and take on the big things that really matter to the business and to your leaders. Use those opportunities to shine a light on your strengths and to garner the support from key leaders. Earning their trust and support will help grow your career.

On Making the Leap to a New Position
I am often asked how I made the transition from engineering to HR, since the world tends to see those roles on opposite ends of the spectrum. In fact, my personality is an equal blend of systems thinking and a love for serving people. I can’t say it was easy, and it certainly wasn’t direct, but I eventually found a way to grow a career that capitalized on my unique skills. My journey has also helped me coach others through difficult career transitions.

When considering a transition I ask myself three simple questions: Does the role leverage my personal strengths or interests? (Excelling in a role comes from its alignment with your strengths.) Will I learn or build a new skill? Is there opportunity for me to grow?

My first role change from a small engineering firm to IBM came about because I was able to say yes to all three questions. During my 10 years at IBM, I held six different positions in five cities. I significantly expanded my business knowledge, and excelled in building client relationships.

Leaving IBM wasn’t easy. However, there had been many organizational changes in the company, and my path for growth had become limited. So, I took a leap of faith. I began evaluating careers to see what best aligned with my skills and interests. Getting into a HR leadership role for a Fortune 100 company became my goal, and recruiting was the stepping stone to get me there. I leveraged the client relationship skills I developed at IBM to secure a position with a permanent placement firm. They taught me how to recruit and, in turn, I won several new clients. One client, Disney, offered me a job as an internal recruiter, and my HR career began.

Leaving IBM was the hard but right decision for my career.

On Facing Challenges
Leaving the security of IBM marked the beginning of the most challenging time in my career. During my 10 years with them, I held six different roles in engineering, finance, and sales—and none were just right for me. So I left to pursue something unknown. It took nearly three years to identify my passion for HR and build the skills needed to qualify for my first corporate role. Many times I felt discouraged and questioned my decision. Finally, my efforts paid off and I was hired by Disney as an internal recruiter. It’s amazing how much faster you grow when you are in the right role. I have enjoyed a wonderful career in HR, and can without a doubt say that I made the right, if hard, decision.