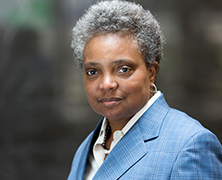 From 1996 to 2002, Lori served as an assistant US attorney in the Criminal Division of the US Attorney’s Office, Northern District of Illinois. In this role, she tried many cases to verdict and also handled federal appeals. While an AUSA, Lori worked on a range of public corruption, fraud and violent crime cases.

From 2002 to 2005, Lori served the city of Chicago in various roles. As interim first deputy procurement officer at the Department of Procurement Services (DPS), she conducted an across-the-department reorganization and reform of DPS business practices, including redesigning Chicago’s minority and women business enterprise program. Lori also served as general counsel and chief of staff in the Office of Emergency Management and Communications and as chief administrator in the Office of Professional Standards (OPS) of the Chicago Police Department. During her time with the OPS, she managed a 100-person office of civilian investigators charged with investigating police-involved shootings, allegations of excessive force, and other misconduct alleged against Chicago police officers.

In 2005, Lori returned to Mayer Brown as a partner, and currently serves as co-leader of the firm’s Commercial Litigation action group.

Earlier this year, Lori was appointed chair of the Chicago Police Board by Mayor Rahm Emanuel. She was also recognized as one of Global Investigations Review’s “Women in Investigations” for her achievements.

“Being a woman in my profession has been a very interesting challenge,” said Lori. “I embrace the reality that women have been, and likely for my lifetime, will be measured by different standards. Those are the cards that we have been dealt.  But that is the start of the conversation and what I have done is figured out how to navigate with those terms of engagement.”

The most important quality a woman leader should have is…
…determination, perseverance and leading by example. I think it is really important to engage those you lead so that they feel a stake in the outcome of the work that we do for clients. That means taking time to give constructive feedback, helping younger lawyers grow and take on greater responsibility, being willing to listen and being conscious about how I can be a better leader by learning from my team and other colleagues.

The career advice I’d give my former self:
Take more risks; it will be okay.

Words I live by:
Work harder than everyone else, but have fun doing it.

The one thing I’d do differently in my career, knowing what I know now, is…
…taken more transaction courses in law school. But generally, I have no regrets or second thoughts about the course that my career has taken.

When I really need to focus on a project, I…
…focus and get the job done.

My biggest career leap (and what I learned from it) was…
…leaving the U.S. Attorney’s Office and going to work as a civilian to lead the Office of Professional Standards of the Chicago Police Department. The job did not come with many allies.

Being a woman in my profession has been…
…a very interesting challenge.  I embrace the reality that women have been, and likely for my lifetime, will be measured by different standards. Those are the cards that we have been dealt.  But that is the start of the conversation and what I have done is figured out how to navigate with those terms of engagement. Our aggregate numbers are not what they should be and we need to be better represented at all of the various power positions.  I know I have a responsibility to make a way for all women and importantly not view other women or people of color as the competition in a zero sum game. That negative perspective hurts everyone.

I’ve learned that failure is…
…a fact of life. Failure can be humbling, but not the end and still presents an opportunity for learning and growth.

I maintain a healthy personal life by…
…never forgetting how lucky I am for the life that I have and making sure that my family always comes first.

I knew my present career was what I wanted to do when…
…the first time I stepped into a courtroom for a trial and felt that adrenaline rush that always comes from trial work. To me, there is no better feeling as a lawyer.