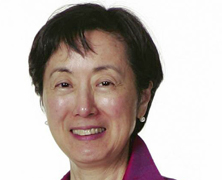 Be generous. Help others shine. Focus on the right thing.

Travels With Charley: In Search of America, by John Steinbeck

As I reflect on my personal life, education and career track, I can say that I was fortunate and privileged that some outstanding persons took an interest in me early on during a time when there were no women in management and there was little or no diversity in the workplace.

These individuals who became my mentors became very interested in what I could contribute to the company and wanted to bring out the best I had to offer. They approached me with the idea that I could be a leader, so consequently I was afforded the tools and classes that would help me become a manager.

Being raised in a Japanese family, my culture played a key role in my development. It was ingrained in me early on that the good of the organization was far more important than the goals and aspirations of the individual. An early mentor strongly suggested that I be the best me. However, I could be a first-rate me or be a second-rate someone else. It was a suggestion that I never forgot.

If I could impart some essential wisdom to those women aspiring to move up the corporate ladder it would be the following:

Be Open. Life changes and you have to be prepared to respond.

Be Mindful. By not being present you can miss an opportunity.

Look Outside Of Yourself. Find those individuals that can help you learn.

Although it’s certainly easier today for women to move up the corporate ladder, we can’t neglect the contributions of the first generation of women. They paved the way and broke through the glass ceiling creating ample opportunities for today’s woman executive. I’m proud of my company, WellPoint, Inc., because it excels at modeling women leaders and promoting a number of women to the executive suite.