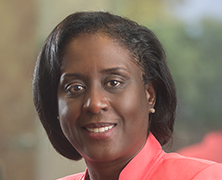 Lisa Smith has been a leader at Southern Company electric companies for more than two decades. As Georgia Power’s Metro South region manager, she’s accountable for the day-to-day operations in an area serving about 265,000 customers.

She provides leadership and expertise in technical and functional areas of the company and is responsible for managing sales, customer service, community and economic development, and external affairs. Georgia Power serves a total of 2.4 million customers in all but four of Georgia’s 159 counties.

Working in a traditionally male dominated sector, Smith’s colleagues say she’s willing to take on challenges and uses opportunities as lessons to learn and grow. Smith says being a woman in her profession has been life changing. “A hard hat and heels can be a uniform for opportunity,” she said.

Smith launched her career in the electric utility industry in the mid-1990’s as an engineer at Mississippi Power, which is also part of the Southern Company group. Since taking on that role her expertise and adaptability have led her on a career path of increasing responsibility across various areas. Earlier this year, the company ranked first in the South Region for customer satisfaction by the J.D. Power Electric Utility Business Customer Satisfaction Survey.

Her colleagues say she’s an asset to the Southern Company family, and demonstrates the company’s motto “A Citizen Wherever We Serve,” in both her personal and professional life. She said her biggest career change has been relocating. “I have learned that being willing to move is like zip lining. It may be a little uncomfortable at first, but it is a great way to gain different perspective and ultimately soar,” she said.

Passionate about employee development, she was instrumental in establishing one of Georgia Power’s first employee resource groups more than a decade ago. Initially created to help empower African-American women at Georgia Power in leadership, networking and community service, the group now has over 500 members across Georgia, including men.

Recognized as a Paul Harris Fellow, Smith serves on Clayton State University’s advisory board, the board for Arts Clayton, and the Regional Business Coalition. She has served on the board for the Newnan-Coweta Chamber of Commerce, Fayette Education Foundation, the Central Education Center. Enthusiastic and committed to education, she was among a group of community leaders selected to help revitalize Coweta County Georgia’s Communities in Schools program.

Smith holds a BS in electrical engineering from Mississippi State University and an MBA from Kennesaw State University. She says she lives by words her grandmother always articulated – “Do the things that I never had a chance to do.”