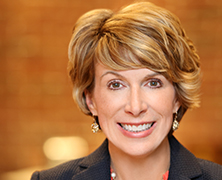 Now in her seventeenth year at Arrow Electronics, Vice President of Finance Lisa Gerber has developed a sterling reputation as a dedicated and visionary executive. Her steady rise through the Arrow ranks is a testament to her intelligence and perseverance. However, with all her professional success, Gerber still says that her greatest accomplishment is “being able to see folks I have managed become strong leaders.”

Gerber began her tenure with Arrow Electronics after successful stints at American Express, US Airways, and Freddie Mac. She joined Arrow as a senior manager and was promoted to finance director of AIS business, asked to oversee a $1-billion storage business unit, promoted and placed in charge of a $5 billion-per-year business unit, and promoted again to chief financial officer for the $10-billion ECS Americas Division. Now, as vice president of finance, she oversees $14 billion of Arrow’s Americas business groups.

Gerber has won many awards over the course of her career, starting with the Rings of Reward from American Express. She is a three-time recipient of the Arrow President’s Club Award. She also received the Outstanding Achievement Award, presented by Women in the Channel by DRC at the Arrow Global Finance Convention.

The mother of three active children, Gerber, along with her husband, spends much of her free time attending various sporting events. The balance between family life and work is a tricky one, but she excels at both.

To Gerber, diversity means including diverse backgrounds in the formation of teams or organizations. “Diversity introduces a variety of viewpoints to every problem, project or innovation, which is critical for making the best business decisions,” she affirms.

A strong advocate for equality in the workplace, Gerber goes out of her way to help junior executives of either gender become Arrow high achievers. She offers this advice to professionals on their way up: “Seize opportunities to learn new skills, even if it means making a lateral move. And never let fear of failure get in your way.”