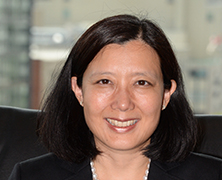 As a leading patent litigator at Fish & Richardson, Linda Liu Kordziel has a reputation as a winning lawyer with vast technical expertise and a natural ability to simplify complex technical information for judges and juries.

Kordziel’s legal career came to fruition while she was a double major in biomedical and electrical engineering at Duke University. When she learned about patent law, she said the mix of legal and technical matter was exactly where she wanted to focus her energy. “Patent law has been a great way to work in both areas,” she said.

Today, she’s with the largest intellectual property firm in the county where she’s made a name for herself handling high stakes patent disputes in federal courts and before the International Trade Commission.

She has worked tirelessly to protect a client’s technology for hybrid electric vehicles and has earlier reached a settlement closing out an ITC investigation and three separate federal district court cases. Kordziel continues to protect the client’s patented technology from infringement by other auto manufacturers. Last year, she was co-lead counsel on the team winning a $28.9 million jury verdict.

She has been named a Washington, D.C. Super Lawyer for the past three consecutive years and has been involved in a variety of pro bono and nonprofit organizations. Among them are the Children’s Law Center and the Asian Pacific American Bar Association. At the firm, she serves on the selection panel for the 1L Diversity Fellowship Program, which provides diverse first year law students an academic scholarship and a paid summer associate program at the firm. She is also the Litigation Group Leader in Washington D.C. and chairs the Litigation Marketing Group Leaders Committee.