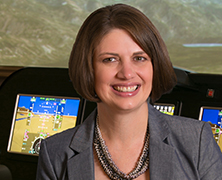 “I think my biggest career leap was transitioning from an individual contributor to a leader and manager of people,” said Leigh. “Figuring out how to shift from accomplishing work myself to accomplishing work through others was a significant enabler to my career and made me a better person.”

Leigh won Rockwell Collins’s 2013 Commercial Systems Lean Achievement Award and was a finalist for the 2007 Chairman’s Team Award as well as semifinalist for the 2005 Engineer of the Year. She is seen as a leader in the industry, having been selected as one of Aviation Week’s Top 40 Under 40 in 2014 and a 2012 Waypoint Tribute to Women of Achievement honoree. In addition, she is a board member of the Aerospace Vehicle Systems Institute.

Within the organization, Leigh serves as enterprise vice chair for the Friends of Asia Employee Resource Group, participates in the Women’s Forum, acts as a mentor in the company mentor program, and sponsors the Engineering Management Community of Practice. She is passionate about encouraging innovation and uses these venues to do it.