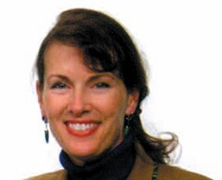 Hanging with family and friends; traveling with my daughter; reading science fiction; watching cooking shows and failing miserably at emulating their recipes.

Look for the positive, plan for the challenges, and celebrate the unexpected

Brilliance of the Moon (Hearn

As the eldest of three children, I learned early on that I could lead. When we were young, that meant I could order my brothers around. When I—and they—realized they could gang up on me, I learned the value of leading through persuasion. And when I was older still, my parents taught me that leading meant more than getting people to do what you wanted—it meant making good decisions, being responsible for your actions, and setting good examples. These leadership qualities have served me well throughout my career.

I joined Booz Allen Hamilton as a consultant after two years as an intelligence analyst at the National Security Agency. I’ve been very fortunate in my career, but I’ve learned that opportunities are part luck and part what you make of them. At times I’ve been in the right place at the right time—but those are precisely the times that I had to dive in, take on additional responsibilities, and make good decisions. Along the way I learned that knowing the business is important, but not nearly as important as cultivating relationships.

One of the hardest things I’ve had to do as a leader was to move on and hand over a business that I’d nurtured from the ground up. But the person I passed it on to did things with it that never crossed my mind—he took it to a new and different level. That taught me a valuable lesson: grooming the next generation and infusing teams and projects with new blood are extremely important. They, in turn, are forced to groom their next generation. It’s what keeps a 90+-year-old firm like Booz Allen thriving.

I’ve learned too that, while consensus and collaboration are important, making the most of your firm’s diversity means embracing dissenting opinions—not quieting them. Diversity isn’t about making everyone think alike; it’s about celebrating differences and seeing things in different ways. More ideas and different ideas almost always lead to better ideas.

Being a leader doesn’t mean that you have to have the official mandate. It means that you actively participate in making something happen. You don’t have to be the one seen holding the flag—the key is removing yourself from the equation and keeping the focus on what you want to have happen and how to make sure it does.