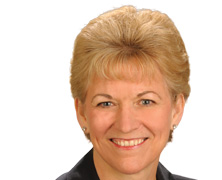 Maintain your integrity and ethics—that’s all that matters in the end.

Strategic planning consultant to NH Department of Health and Welfare

It is important for women beginning their careers to recognize that there are no shortcuts, no excuses, and no instructional handbooks for their success. They must shape their own futures and not be distracted by potential stereotypes and perceived cultural norms, nor use these as excuses for a lack of parity in the workplace.

A perception that a path may be blocked because an industry is male-dominated can be a roadblock on a woman’s path to a leadership position. I recall a conversation I had with my father soon after I finished graduate school. I was concerned that I might not be able to land a finance job because, at that time, men largely dominated the industry. My father told me in no uncertain terms that I was making excuses and that if I wanted to work in finance, I should make it happen. I was the only thing standing in my way, he said. He was right. Since then, I have believed that I could succeed in whatever area I chose to pursue, and that I alone controlled my destiny.

Education is one of the best ways for women to prepare to compete. Higher education is essential to teach women advanced critical, analytical, and communication skills, which I consider to be fundamental for any executive. Women who’ve earned undergraduate degrees and have worked a while should consider post-graduate schooling to enhance their skills and broaden their perspectives. Women also should never lose sight that learning is a lifelong experience.

Women have earned a rank in almost every marketplace, and they play a vital role in virtually every aspect of public life. Women have opportunities to excel, lead, and achieve parity with men, but it is imperative for women to have the knowledge, skills, and confidence to pursue these opportunities. Women must stay focused, be accountable, and most importantly, be flexible as they pursue leadership positions. With time, I think we will see more women excel in leadership positions, land board appointments, and achieve compensation parity, all while serving as role models for their younger counterparts. Eventually, maybe more women will see their role as I see mine. Even as I ultimately sat in meetings and at boardroom tables that were often dominated by men, it simply never occurred to me that I shouldn’t be there, too.