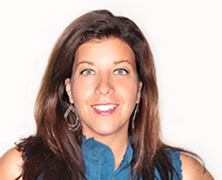 Do one impossible thing a year. You define what’s impossible. And it’s ok to be scared. Being scared means you’re about to do something brave. I like myself best when I’m being brave.

After years as a sales rep, Kristen Cavallo launched her advertising career as an intern at MullenLowe in 1994. She rose to the position of chief strategy officer and was eventually named the first female president of MullenLowe Boston. As CSO and president, Cavallo helped the flagship office grow by 86% over six years and create innovative work for American Greetings, Royal Caribbean, JetBlue, Acura and others. In 2015, she was asked to guide the agency’s mission and growth in all four domestic offices as chief growth officer.

As MullenLowe’s chief female officer, Cavallo encourages women to take a seat at the table, pulls them on stage and supports a family-forward culture. She has spoken at the 3% Conference, the Cannes Lions International Festival of Creativity and Hult International Business School’s commencement. She is twice winner of the Jay Chiat Award and was named an Ad Age Woman to Watch in 2014.

Cavallo has raised two children and currently cares for abandoned children in Rwanda through New Homes, which she has supported for ten years. She has also summited Mt. Kilimanjaro and completed the Richmond Marathon.

For Cavallo, diversity “means having a real appreciation for differences and a belief that our differences make us better.” She goes on to explain, “In branding, revolution starts on the sidelines – never with market-share leaders, as they are winning by the rules already set. Brands like JetBlue, Netflix and Airbnb change the way we view things. Progress demands we question convention. The same is true for people. Diversity forces us to rewrite the rules.”

Kristen teaches employees how to sprint and to think, mentors them to speak up and inspires them to challenge themselves. “You can’t always choose your title or your salary. But you can often choose your boss. Choose someone who will invest in you, put you on stage, push you out there – someone who will ‘leap out of the dugout should you ever charge the mound.’ Then be that for someone else, preferably a woman. Don’t compete with the other women in the room. No one wins. Be the kind of woman you go to war beside, not against.”