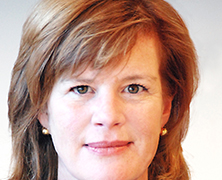 Leading the Way for Women in The Legal Sector

Reed Smith’s Kit Chaskin has developed and implemented some of the most innovative women’s career advancement programs in the legal sector.

In addition, over the past 20 years, Chaskin has achieved recognized results by recovering millions of dollars in covered insurance claims for her clients. She counsels clients around the globe in areas such as risk transfer, risk management, and policy terms.

She is also known as the longtime global director of the Women’s Initiative Network at Reed Smith (WINRS) – a global community of lawyers operating as a “Virtual Practice Group” dedicated to enhancing the workplace to more effectively develop, reward, engage, and attract women lawyers. Chaskin said her biggest career leap was when she started directing the initiative. “I learned to lead,” she said.

With her recent move from Reed Smith’s office in Chicago to its London location, Chaskin is providing new opportunities to expand and strengthen the WINRS network. Moreover, she has made WINRS a business driver connected directly to the law firm’s strategic priorities.  As of year-end 2015 in the U.S., women at Reed Smith include:

She has been instrumental in creating numerous programs, including a Parental Leave Policy and ReturnRS, that provides support for parents before, during, or after a leave. She spearheads the new Work/Life Balance Policy that moves beyond an accommodation mindset to recognize various categories of flexible working arrangements. She is also instrumental in PipelineRS, designed for women associates who have been practicing for at least four years and for whom partnership is a goal.

She is a driving force behind numerous accolades the firm has received over the years. Most recently, in 2016, the firm again received top rankings and Gold Standard Certification from the Women in Law Empowerment Forum, for the sixth year in a row. Reed Smith was also recognized as being among the 2016 Best Law Firms for Women by Working Mother and Flex-Time Lawyers, was named Equality & Diversity Firm of the Year by In-House Community, was honored for having the Best Health & Wellbeing Initiative at the 2016 HR in Law Awards, and received the Diversity Leader Award, for the second year in a row, from the Profiles in Diversity Journal.