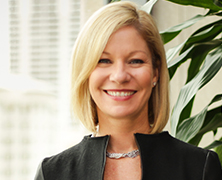 Kirstin Turner has 15 years of experience in the financial industry, and more than a decade of managerial experience. She came to RBC Wealth Management–US 16 months ago from Morgan Stanley’s Houston branch, where she had overseen 40 financial advisers with $5 billion in assets under management. As a complex director at RBC, she manages 68 financial advisors across seven different branches, with $6 billion in assets under management.

When Kristin started with RBC, her complex was one of the smallest in the firm. But instead of being limited by that fact, she sought to change it by focusing on recruiting. Just months later, those efforts have paid off—eight new financial advisors are bringing in $7 million in revenue. In fact, the overall productivity of the team Kirstin manages has increased, putting her complex in RBC’s top five overall in terms of net new assets. As the only female complex director at RBC Wealth Management–US, Kirstin is a role model and leader for women in the company.

“I think my biggest career leap came in 2008,” said Kristin. “I became the manager of a three-branch complex in Illinois after spending two years as a sales manager of a branch in Houston. It was then, in the middle of the largest financial crisis of our generation, that I learned that our business is about people, not investments.  Our employees and our clients needed to feel safe and cared for—a natural trait for a female leader, and one that I continue to nurture.”

Outside of work, Kirstin dedicates herself to her community by working with organizations that help empower women and girls through financial literacy. In February of this year, she organized and hosted a Women’s Empowerment Forum that attracted 100 local women who had the opportunity to learn the basics of insurance, estate planning, and more. Her goal is to help women be proactive, rather than reactive, with their finances.

Kirstin is also involved with Adopt-a-Family, an organization that helps families avoid homelessness and provides stability in times of crisis. She is also a member of Women’s Resource Center, Coastal Conservation Association, Compassion International, and the Loggerhead Marine Life Center.