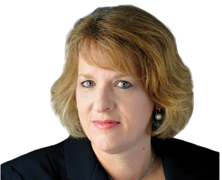 My father had a positive influence on my career as a role model and supporter. He grew up in the construction industry beginning with his time in the Seabees during WWII. He took tremendous pride in his work. My dad grew up in an extended family that was not particularly supportive of women in non-traditional roles. However, he ignored those conventions and encouraged me to be whatever I wanted to be, and I wanted to be an engineer.

I did not have any single mentor who shaped my management style. Over the years I learned from many colleagues, and I have adopted those practices that were effective and avoided those that were not. Among my most valuable tutors was a boss early in my career who introduced me to the workings of the business and taught me the culture of the organization.
As a woman in a non-traditional role, I was constantly tested by veterans. I took it as a personal challenge to exceed their expectations and earn their respect and acceptance by the quality of my work. I have always practiced getting involved in the job, being experiential, and learning from those in the field.

Some of the most difficult experiences were the most satisfying lessons. There is nothing more satisfying than being told you can’t do something and then accomplishing it. I found that once I proved myself, those colleagues who had tested me became my greatest advocates and supporters.

My leadership style is straightforward. There is more than one correct way to accomplish your task, and people are more dedicated and engaged when they have a role in making decisions. I hire smart, capable people, give them clear direction and the tools they need to succeed, and then let them do their jobs. I believe in diversity, and the team I lead is a reflection of that. They have different perspectives and experiences, and this helps us develop better solutions.

I believe in taking sensible risks and allowing people to make mistakes as long as we learn from them. Lastly, I believe in celebrating accomplishments, recognizing jobs well done, thanking people for the contributions they make each day, and always taking the time to laugh, have fun, and enjoy work. I have found this attitude is contagious.

Staying competitive requires an insatiable appetite for continuous learning and improvement. I believe in learning from both successes and failures, seeking out and adopting best practices, and always looking for future opportunities.

I would advise young women preparing for careers to have confidence in their abilities and be active learners. When you do, people are willing to teach you the business. Don’t be over-sensitive and keep your sense of humor and your sense of self. Be open to different roles and assignments to broaden your background and perspective. Don’t be afraid to express your opinion and your ideas.