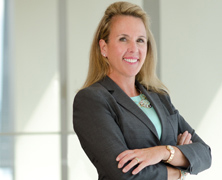 If you don’t play to win, why keep score?

Be yourself, and never be afraid to take the wheel when you have a constructive idea or spot an opportunity. Sometimes that’s easier said than done; no one wants to look or feel stupid, and no one likes to fail. On the other hand, if you keep your opinions and ideas to yourself, who are you helping?

In February 2002, I returned from maternity leave. The corporate world had changed dramatically following September 11 and the Enron fiasco. Transactional work was slow and I was bored. Leaving my baby to come into an office and twiddle my thumbs was not for me. I had two choices—quit or find something productive to do.

Although there was the lull in our mergers and acquisitions practice, our financial restructuring department was going gangbusters. I had no bankruptcy experience, but I saw a path where I could help my colleagues—and myself. I approached a senior partner and asked if I could assist him on the corporate work for his client, an unsecured creditors committee, with the goal that I would represent the company following its emergence from bankruptcy. His response: “We haven’t done that before. But, if the situation is right, I’ll let you try.” I have worked with post-restructured companies and boards ever since.

My experience with C-suites and boards, in turn, has provided me with significant exposure to and participation in business decision-making and corporate governance. Following the demise of Dewey Lebouf, arguably the Enron of the legal world, I became a strong proponent, and the principle draftsperson, of our firm’s governance guidelines, as well as an advocate for the creation of an Audit Committee, of which I am now the chair.

The road behind you leads to the road in front of you. Be a driver, not a passenger.

On Finding Success and Staying Competitive
There is no “one size fits all” method for success, although I think there are certain “must haves.” First: Be decisive and confident in your decision making. Second: Recognize and embrace that the fact that the greatest successes are achieved because of and shared with your mentors, colleagues, and mentees. Third: Have fun along the way. People prefer to work and play with others who can laugh now and again!

On the Importance of Role Models and Mentors
Leaving aside my parents (love you both!), I would have to say Lee Franzman, my high school basketball coach. Mr. Franzman took six girls, 5’8” and under who were filled with plenty of teenage angst and competitive with one another, and made us champions. He told us, “You are not the most talented, tallest, or fastest group of kids I’ve ever had, but you are the smartest. If you use your brains and play like a team you can beat anybody.” Initially, each of us was clearly insulted. That said, he challenged us to play together, our sum being greater than our parts. And we won. A lot! I modify his words, but my core management style derives from the lessons I learned from him. Thank you, Coach.