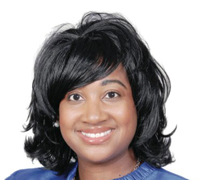 Family time, nature walks, reading, choral directing, ministering to the homeless with my husband, encouraging entrepreneurs to grow their business.

You were chosen for such a time as this.

Developing the Leaders Around You, by John C. Maxwell

My professional foundation has been paved by individuals who purposefully or inadvertently imparted knowledge that helped me evolve into the leader I am today. Like a sponge, I eagerly absorbed the information which equipped me for each new season.

Although many years have passed, the actions of my initial mentors are quite vivid. My late grandmother ensured our family’s name and public appearance was reflected well. She consistently told me, “Don’t dress for where you are; dress for where you are going.” I later understood Grandma was encouraging me to think like a leader, to dress my mind with the knowledge needed to seize the opportunities that lie ahead.

It was during my tenure at Sandia National Labs as a high school work study that I encountered my first supervising nurturer who carved my character as she vigorously exemplified dedication, humility, confidence in completing tasks and a passion for helping others. These intangible nuggets outweigh the tangible skill sets I honed through the years.

Leaders are not born or appointed by their socio-economic status or occupational title. They are developed by the influences and experiences demonstrated within their environment. I have served in many capacities throughout my career: from a purchasing clerk at Sandia Laboratories, Johnson Controls, Bechtel, and UnitedHealthcare, to a soldier in the United States Army Reserves to the supplier diversity professional I am today. Along the way, I was encouraged, enlightened and inspired by my peers, supervisors, those I supervised, military officers, friends and family alike. Although I desired to remain in the presence of some leaders longer than others, I quickly learned that each had crossed my path with a purpose to move me through seasons for such a time as this.

Recently, I looked around for my next guide and realized I was surrounded by those seeking guidance. I had become the leader. What an awesome responsibility to positively affect the lives of those around me by setting the example others would choose to follow.

With gratitude, I stand upon the foundation formed by those who helped me. I now shed light along the path that guides the next generation of leaders. I encourage you to honor your mentors by leading others for such a time as this.