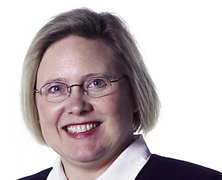 Don’t be afraid to fail. Never stop learning. Your team’s success is more important than your success. Be present. Speaking up and taking a stand, even when unpopular, is far more rewarding than staying silent and being regretful. With a little courage and encouragement, we can all make a difference.

Actions speak louder than words.” Most of us have heard that phrase. I heard it from my parents and grandparents when I was growing up in rural Arkansas on a farm that has been in my family for three generations. My parents raised me to believe I could accomplish anything as long as I worked hard and respected others. Those lessons in leadership have served me well throughout my career. The leaders I have respected most have been those who lead by example and “walk the talk.” Thurmond Woodard, the former vice president of Diversity at Dell, was that kind of a leader.

Because Thurmond respected all people, he and I forged a bond that gave me the courage to be an openly gay executive at Dell. His willingness to learn from me and my willingness to trust him helped put Dell on the path to becoming a great place to work for gay, lesbian, bisexual, and trans-gender employees. It hasn’t happened overnight. Together we learned that much can be accomplished around the controversial issue of respect and inclusion for GLBT employees by working within the system, sometimes slowly, and building consensus to move forward. I assumed a broader role in the company and became the Chair of the Executive Board of PRIDE, Dell’s GLBT network group, so others would see an openly gay executive actively participating in the effort.

Demonstrating trust and empathy are critical components of building strong teams and influencing others, but when someone is gay and “in the closet,” trust and empathy are impossible to fully achieve. Knowing the people with whom you work, on a personal as well as professional level, leads to greater understanding of motivations, which in turn leads to more cohesive teams that achieve the best results.

Through my leadership roles, I have learned from others and others have learned from me. To be successful, in the workplace or in the community, you have to set the right tone as a leader. When you respect and trust others, through your actions not just through your words, you are rewarded time and time again.