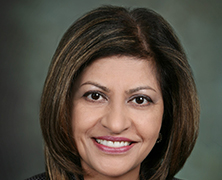 She says her biggest career leap was arriving in America from her native India as an 18-year-old college student. “When there is a fork in the road, take it,” she said. Kapoor earned her undergraduate degree in information systems from the University of Maryland, an MBA from Johns Hopkins University and has completed executive programs at MIT and Harvard University. She’s passionate about innovation, STEM, mentoring, and women in the workplace.

In offering advice to women rising in the ranks, she says the smartest leaders know when and how to get help. “No one has all the answers. Surround yourself with smart people and seek the advice of mentors and colleagues whenever you can,” she said. She describes the most important quality of a woman leader as being empathy. “Women tend to have this quality naturally. We should use it because it helps us connect with customers and employees at a deeper level,” she said.

Kapoor has earned numerous accolades, including the 2016 Women in Technology Award; FedScoop’s Top 50 Women in Tech; 2015 Stevie Award for Female Executive of the Year, Business Products; the 2014 Janice K. Mendenhall Spirit of Leadership Award from the American Council for Technology/Industry Advisory Council; the Fed100 Award; and the Asian American Engineer of the Year Award. Earlier this year, Washington Executive named her to its Top 30 Executives to Watch list.

Kapoor is active on the boards of several non-profit institutions. She is on the Dean’s Council and the Board of the Belfer Center for Science and International Affairs at Harvard University’s John F. Kennedy School of Government where she has an active advisory role. She is also a member of the Dean’s Council at Johns Hopkins University.