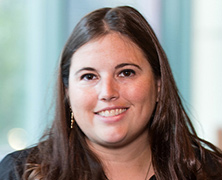 Difficult Conversations: How to Discuss What Matters Most by Bruce Patton, Douglas Stone, and Sheila Heen; Dad Is Fat by Jim Gaffigan

Kiwanis, so many charities are supported through this organization

Become the Leader You Wish You Had

The importance of relationships was lost on me early in my education and some parts of my career. My goals were aligned with myself—setting my career path and being recognized for my achievements. I had fears of not being the best on a team. Within a few years of starting my career, I had gone through some personal struggles, conflicts at work, and ultimately had time to mature and reflect. I came through that time realizing that I wanted to be part of a team that had the best people, not to be the best team member. Thankfully, I realized early enough in my career that satisfaction has to come from lifting others up, building teams, and making connections; ultimately, the relationships I formed along the way were most fulfilling.

What I wanted next was to become the leader I wish I had had. I have had several supervisors, but only a couple who could truly be labeled as leaders, although all have influenced me in some way. What I wanted was someone who would fight for me, someone I could both confide in and joke around with, and someone who encouraged me and provided direction when I needed it, while also giving me autonomy. I was given the opportunity to be that person for others when I joined GEI Consultants, Inc.

When I reflect on the leadership opportunities I have been fortunate enough to be part of, and the opportunities that I have helped create for others, my sense of accomplishment and achievement far outweighs the satisfaction I have from my technical and scientific skills. From that, I find my passion and the pride I get from my team as I watch them grow.

There are days when I do not live up to my own vision of a leader. But I think it is important to reflect, improve, and forgive ourselves, as we balance the various parts of our lives. On any given day, I work at being a mother, wife, friend, client manager, project manager, and leader; the attention each role receives may shift, but the importance of each does not.