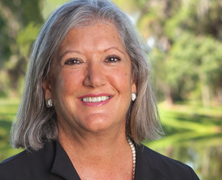 Thanks to often repeated words of wisdom from my father, I have a fearless streak that has always been a professional advantage. He taught me from an early age not to let fear get in the way of going after what I want. He’d say, “Fear is the biggest challenge most people ever face. But if you overcome it and conquer it, you’ll be successful.” I’m so thankful I took that message to heart.

I started my career as a real estate agent in Pittsburgh, and later moved into management, and for 18 years I built up a nice little comfort zone. Then an offer came to become president of Coldwell Banker Residential Brokerage in Colorado. It was an exciting, but also daunting, opportunity. Not only would I be leaving behind all of my connections, friends, and family, but the jump in responsibility was enormous. And I knew next to nothing about Colorado.

I should have been more afraid. But I knew that if I didn’t grab that opportunity, I would regret it. Taking the promotion was a pivotal, career-changing and life-changing event. If I had not taken that leap, I would never be where I am today.

After taking on four new positions in four different states over the past 10 years, I have become convinced that you must take chances in life to grow. I have learned never to shy away from challenges, but instead embrace them for what they are—opportunities to grow and shine.

So the next time a new challenge comes at you, instead of worrying, shout “Bring it on!” Work hard and you will be successful.

After all, if we always stayed in our comfort zone, life would be boring.

On Facing Challenges
Building a career as a single mother was the biggest and most rewarding challenge I have faced. Realtors have unpredictable and varied schedules, which can be difficult when you’re also juggling school events, homework, and activities. It’s a concern that keeps many parents, and I think especially mothers, up at night. You’re constantly questioning whether you’re doing the right thing for your child and for your job. There’s a lot of guilt. But I was determined to be both a full-time mom and successful businesswoman.

I remember a mother/daughter basketball game, which came on the tail-end of a business trip. My plane landed just before the game began and I arrived at the school after it started. They threw a jersey on me and I ran out onto the court, only to score a basket for the wrong team. But I made it there, and that meant a lot to my daughter, and to me.

Now that she’s grown and has children of her own, she tells me that I was her biggest role model. Watching me taught her confidence, dedication, and a strong work ethic. And that’s something for which I will forever be thankful.