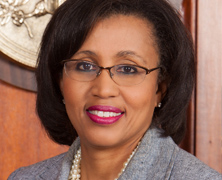 As a young girl, I remember having a poster on the wall in my bedroom that read, “If you can dream it, you can think it. If you can think it, you can become it.” This phrase resonated with me, and I always thought about the possibility of becoming an attorney. However, this goal seemed unreachable to me, because all of the images of lawyers on television at that time were male and white. I had not met a woman who was also a lawyer.

It was not until the summer of my junior year in high school that my goal became more tangible. That summer, I spent my time studying law and philosophy in a program designed for minority high school students. It was there that I met the woman that would be my mentor for more than 20 years, Bernette J. Johnson, (now Chief Justice of the Louisiana Supreme Court), who was a practicing at¬torney at the time. During that summer, I had the opportunity to shadow then attorney Johnson. She was the first African American woman who was also an attorney that I had ever met. Having her as a mentor and guide through my career—in her role as an attorney and, now, as a judge—has served as a visual example of what I could achieve.

Mentoring is the most basic method of motivating and encouraging a young person to believe she can achieve what may seem to be a distant and almost impossible goal. I attribute my personal success to a combination of factors—my mentor, my belief that God will bless the work of my hands as I mentor to other young people, and my lack of fear about walking through doors that were previously closed.