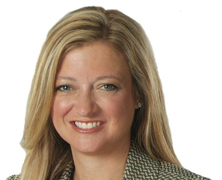 MS from the University of Pennsylvania; gradu- ate of Dickinson College and the Dickinson Center for European Studies in Bologna, Italy

Be straight with people and take a long view of relationships.

Team of Rivals: The Political Genius of Abraham Lincoln, by Doris Kearns Goodwin

have been fortunate throughout my career to have been the beneficiary of committed mentors—several of Philadelphia’s most prominent business, political and community leaders— who have taken a chance on me. In return, I have dedicated myself to success and to exceeding their expectations at every stage of my career.

My career has included politics, the development of a private club and a sports arena, attracting and hosting a national political convention, establishing a corporate communications department for Comcast and now reshaping Philadelphia’s skyline with the development of Comcast’s new headquarters building. In addition, I lead Comcast’s corporate administration, including diversity.

In politics, I gained a great appreciation for the value of reputation and networks. I saw new laws passed for the nation, and international policy changed, based on the trust of relationships. Because of that experience, I stand by my word and work hard on building personal connections.

Building support in a predominantly democratic city for the 2000 Republican National Convention was all about communication. Prior to the convention, the city, suburbs and the bordering states had not cooperated on large scale ventures; the convention brought the entire region together for the first time. By successfully communicating and attracting business, political and civic leadership early in the process, we were able to secure the financial, public and volunteer support for the convention. We also impressed the 50,000 delegates, media and attendees who put our region on the map.

At Comcast, I’m proud to be part of a company that is committed to connecting our customers to the information, news and entertainment that is so important to them. With 90,000 employees nationwide, Comcast is dedicated not only to having a diverse workforce, but also to doing business with diverse suppliers, providing diverse programming to our customers and investing in the communities where our customers and employees live and work.

I am committed to returning dividends on the investment my mentors have made in me; also by taking chances on people—especially women—and helping them reach their career goals.