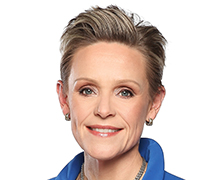 Aflac’s Chief Accounting Officer Mentors the Next Generation of Leaders

June Howard joined Aflac in 2009 as vice president of financial services. She was promoted to senior vice president the following year and again to chief accounting officer just a few months later.

A valued member of the Aflac team, Howard is responsible for financial reporting and control, accounting policy, investment accounting, corporate tax, and budgeting. She’s made a tremendous impact on Aflac’s accounting practice.

One of her most successful initiatives was the global implementation of a new general ledger. As part of this, she led a joint United States-Japan team and created a program called “All Aflac.” It’s strategically designed to bring more synchronicity to the company’s global business practice. The project was completed within budget in record time.

Prior to Aflac, June worked at ING and her biggest career leap to date came from a promotion to head up its financial reporting area. Her team tripled in size and she had much success in managing the larger group. “I learned that delegation was the key to my success,” Howard said.

She’s an advocate for women’s professional development. As part of her initiatives, she hosts the Finance Women’s Lunch, an informal meeting that encourages Aflac’s female staff in Japan to pursue career goals. She’s also actively involved with programs such as Aflac’s Bold Moves, Girls Inc., Women’s Tea, and the Global Women’s Leadership Conference in Tokyo. Her key objective is to create opportunities to mentor and pass the baton to the next generation of leaders. “It’s my responsibility to be a role model for the next group of women,” she said.

Howard believes the most important quality a woman leader should have is authenticity and that a positive attitude is essential. She lives by the golden rule: “Do unto others as you would have them do unto you.”