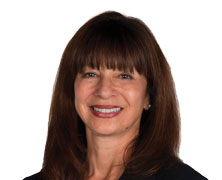 It can be done—in other words, if you set your mind to it, there is nothing you can’t achieve. I’ve tried to instill this philosophy in my children because it has served me well in my life and will hopefully do the same for them.

Why do I think women have not advanced equally in the workplace if they achieve at a superior rate in educational institutions?

The answer is quite simple and tragically can be found in the cliché “It’s not what you know that counts, it’s who you know.” As women move from the classroom into the workplace, they may not even realize it, but the rules change. It’s no longer enough to be the smartest in the class. In order to get ahead in the world of business, one not only has to be smart, but savvy and get the attention of the people at the top.

Do I think there are things that could be done to change this disparity in the professional arena? Absolutely. One thing that can be done is to continue to educate women about how to function successfully in what is still a man’s world. There is a book that was recently made into a movie, Act Like a Lady, Think Like a Man. I’m actually thinking about writing a book that teaches just the opposite: “Think Like a Woman, Act Like a Man.”

I find it fascinating that most men in the business world have no trouble bragging about themselves and their accomplishments, whether justified or not, but women are extremely uncomfortable talking about themselves at all, let alone bragging. If you don’t brag about yourself, no one else will. If no one else brags about you, no one will know what you’ve accomplished. If no one knows what you’ve accomplished, no one is going to reward you for those accomplishments. So if you want to get ahead, you have to let people know why you deserve a promotion or a position on the board.

Another thing that can be done is to try to level the playing field. How many deals are done on the golf course? The answer is too many. Having taken golf lessons and failed miserably, I started a retreat at my firm hosted by our women partners for our women clients. Instead of playing golf, we have some substantive panel discussions, followed by spa treatments. It’s been a huge success.