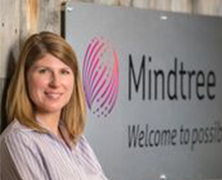 Joelle Smith has a stellar track record of organization-changing business development. Her career has excelled from her early success growing an IT startup, to accountability for a multinational digital enterprise.

As Vice President of Mindtree and Global Head of the Travel, Transportation and Hospitality business, Smith oversees all aspects of the business, including strategy, sales, marketing and operations. Her colleagues note that she has an impressive impact on the business and a remarkable capacity to drive fresh thinking in any industry.

With annual revenues of over $700M, Mindtree is a leader in managed services, software application management, e-commerce, mobile, cloud computing and data analytics for clients in 17 countries. Smith pioneered the design and development of the company’s first U.S. delivery center in Florida and established the global Agile Center of Excellence, which created over 300 STEM jobs.

She originally launched her career in capital markets, working on economic modelling at Wharton Econometrics and then moving to Thomson Reuters where she sold software to traders and investment bankers around the world. She pivoted for an opportunity with technology services start-up AppLabs. As AppLabs’ sixth employee, Smith grew the company’s Banking, Financial Services and Insurance Division to a team of 600 in three years.

Having confidence in herself has served Smith well throughout her career. Smith says her biggest career leap was jumping from a technical consultant to a senior systems analyst with a 40 percent pay increase. She discovered the impact of being confident. “A wise female lawyer told me in the waiting room before the interview, ‘Never ask for anything less than you’ve already been offered,’” she said. So in the interview when the CFO asked me why I was asking for so much more than I currently make, I looked at him plainly and said, ‘Cause I’m worth it.’ I later found out the only reason they gave me the job was because of the confidence I had in myself,” she said.

Smith sits on the board of the University of Florida College of Engineering and is an Industry Advisory Board Member for Computer Information Systems and Engineering. She helped secure a baccalaureate degree program in Information Technology at Santa Fe College and serves as an Executive Committee and Board Member of the Gainesville Area Chamber of Commerce. She’s also a mentor for Emerging Women in Technology Start-ups and an executive sponsor for Woman in Leadership at Mindtree.