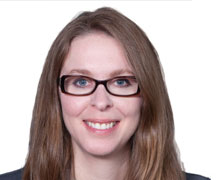 Work hard and treat people how you want to be treated.

When I began practicing law in the late 1990s, I was surprised by the extent to which my chosen field was dominated by men. As a young lawyer, I vividly recall appearing in court for a multi-party hearing and realizing that of the nearly thirty lawyers appearing on the matter, I was the only woman. This was a stark contrast to my experience in law school, where the student population seemed to contain as many women as men, and women routinely held leadership positions in law school organizations.

Over the last few years, I have observed an increasing number of women not only entering the legal profession, but also taking on high visibility executive and leadership positions. When I was made a partner at my law firm in 2005, three of the four new partners that year were women. Today, many of the partners in leadership positions at my firm are women, including a female attorney who has served for six years on our executive committee.

Disparities continue to exist between the number of women receiving higher education degrees versus those who achieve leadership positions in their work and their professional community, but more and more women are successfully advancing in the professional arena. While the reasons for this are undoubtedly complex, I believe the keys to promoting professional advancement and leadership by women can be summed up in two words: flexibility and choice. Advancements in technology have provided much-needed flexibility for both men and women to work in a variety of settings and on a more flexible schedule. Many of my female colleagues have remarked that technology has made it easier to share parenting responsibilities and to balance work with family. Additionally, I believe it is imperative that women continue to have a choice in family planning and personal health care issues.

I have been fortunate to have received an excellent education that served as a springboard for my career. In addition, I have been encouraged throughout my life by a handful of dynamic and energetic female role models who have risen to the top of their field during times when it was difficult to do so. It is my responsibility, in turn, to serve as a role model for other women by encouraging female colleagues to aggressively pursue leadership opportunities and by working within my professional community to create an atmosphere that is conducive to the continued growth and success of women in the workplace.