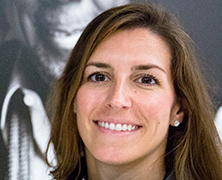 Jessica Garvey says being a woman in the technology industry is exciting. Part of her job is to ask questions challenging how consumers will use complex technology in products offered in the future.

As vice president and general manager of headphones and wearables at Harman International Industries, Garvey manages a 15-member global product marketing team. In the past decade, she’s propelled as a finance manager at the company’s headquarters in Connecticut to her current role in Shenzhen, China, where she’s accountable for building a growing business unit.

She describes her current role as her biggest career leap. “Deep end assignments are always manageable if you can swim,” Garvey said. “Stick to the basics you know well and always ask for help if you need it.”

Garvey’s colleagues say she is well-respected globally for her leadership, success, and for being a mentor. In her tenure with the technology giant, she has executed seven roles across two countries. She’s known for being extremely well rounded, embodying analytical as well as creative skills. She has been named one of the company’s rising talents, participating in a high potential development program.

As she approaches her five-year anniversary in China, Garvey says she’s learned that family, friends, and teammates keep you connected to who you are regardless of where you operate.

Among her most notable accomplishments, she led Harman’s entrance to the Bluetooth portable speaker Smart Audio segment, which boats a best in class cost structure and has achieved number one global share. Over the past four years, Garvey and her teams have won 200 awards for innovation and design for 124 different consumer products.

To advance and promote female leadership, Garvey is the Shenzhen site leader for the Harman Women’s Network. She holds an MBA from Georgetown University and a Bachelor of business administration from American University.