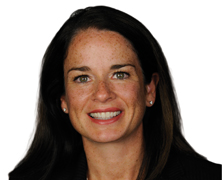 Be bold. The world can only progress through creativity, and creativity can only be achieved through bold ideas, and more importantly, bold actions.

The Perfect Mile, by Neal Bascomb

When asked about career lessons I have learned, I tell others that you do not have to have everything planned out in the beginning. Your career is as much of a journey as a destination and as much about your personal character and skill development as it is finding a job and making a living.

I have always relied on my interests as my compass and allowed my career to develop from there. I started my career with an affinity for travel. My first job after graduating from college with a degree in English was at Yellowstone National Park, where I explored the beautiful surroundings while saving money for my next career move, a trip to Poland to teach English. During my three years there, I learned how to live in a foreign country and contributed to the community in my role as a teacher.

My continued interest in travel and serving others inspired my next job, working for a nonprofit managing programs in the Middle East and West Africa. I was involved in a range of projects, including an education project in West Africa and an economic development project to help nomadic Bedouin women in Egypt.

My attempts to create positive change in foreign countries challenged me beyond my own expectations. I learned about humility and resiliency, as well as my limitations as a leader. After three years with the nonprofit organization, I enrolled in an MBA program to further mature as a leader. Through my program, I became more attuned to my strengths and weaknesses and adopted new approaches to be more effective. I also discovered my passion for solving difficult business problems, leading others, and creating positive results.

I proceeded to pursue a career in consulting and eventually transitioned into finance at PNC, where I currently work as a CFO for PNC’s Asset Management Group and Retail Banking. The diverse skills and experiences I developed while abroad have been critical to navigating similarly challenging projects in business. I have learned that navigating the business world can be as much of an adventure as any.

While I did not have everything planned at the beginning of my career, I had the courage to take some risks and follow my interests. As a result, I have grown and built a career in ways that I could not have scripted.

My education taught me to think analytically and to quickly assimilate new ideas and concepts. It introduced me to a diverse network of classmates, broadening my perspectives, and enabled me to switch careers when I transitioned from nonprofit to for-profit work.

Earlier in my career, I worked with a woman who was never afraid to ask difficult questions and raise challenging issues. I admired her honesty and directness and have worked to incorporate these qualities into my leadership style.