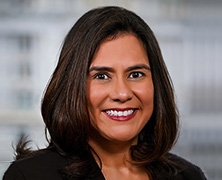 Running, reading, and spending time with my beautiful family

Every problem has a solution and difficult problems need a mix of patience, creativity, and perseverance to solve.

Dare to Lead by Brené Brown

Administrative assistant in a law office

Girls on the Run

How Opportunity Shaped My Career Journey

Opportunity is a tricky word. It’s the one constant that presented itself at every step along my career path. But opportunity took different forms for me. The ability to recognize it and act upon it proved critical in leading me to where I am today.

I started college in the pre-med program. I failed and failed fast. Working two part-time jobs simply became too much for me, while handling the academic demands of a pre-med major. After a disastrous first semester, I decided to major in the one subject where I had achieved high grades—philosophy.

The next summer, I took a part-time job as an administrative assistant at a start-up technology consulting company. Although I was surrounded exclusively by males, I was fortunate because they did not see “a girl” or “a secretary,” they saw a young person who was bright, willing to help, and eager to learn.

One day, one of the senior developers asked me, “Why philosophy?” I explained that I simply loved logic. After I rambled a bit about Plato’s Republic and Kantian ethics, he smiled at me and asked, “Why don’t you work with logic and get a paycheck?” He pointed to his computer and said, “A light bulb can only be on or off, right?” I quietly responded, “Yes.” He continued, “Well, that’s all a computer is, a series of on and off switches; if you understand on and off, you can program a computer.”

About eight years later, another opportunity presented itself in a quiet way. I worked for a leader who appreciated my technical skills and inquisitive nature. Amused by my intellectual curiosity, he offered to teach me health care economics, start to finish, if I continued to quickly produce the reports he requested. After a year of mentoring, he moved on and the company needed someone to replace him. He said, “I have just the woman you need.” And at just 26 years old, I was given my first P&L to run, managing over $2.7 billion in revenue.