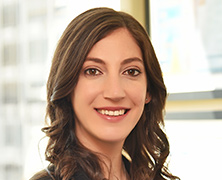 Live in the now and don’t sweat the small stuff.

The Dovekeepers by Alice Hoffman

Waitress at an Italian Restaurant

Lao Friends Hospital for Children – Friends Without A Border

Feel the Fear, but Do it Anyway

One of the biggest challenges I have strived to overcome, both in life and in my legal career, has been facing my fears. Fear can be quite powerful, and for me it has emerged in various forms over the years.

In the beginning, it was the fear of inexperience and youth. Unlike many of my peers who took time before starting their legal careers to explore other paths and develop their skills, I went straight through from college to law school to working at a big law firm. It was daunting, but I told myself to be brave and “fake it ’til you make it.” I realized I was no less able than colleagues who were twice my age. I faced my fear and conquered it.

A few years into my legal career, it was the fear of failure. When I was a mid-level associate, I appealed a prisoner’s burglary conviction. I was scared to take on the challenge because I had no experience in criminal law, and because his freedom would be dependent on my success. It was also my first oral argument before an appellate court. But I did not let my fear stand in the way, and I won the appeal and secured his release from prison. Again, I faced my fear and conquered it.

More recently, it has been the fear of being a woman in a male-dominated profession. But I know that my voice is as powerful as any man’s, and I have refused to let my gender dictate how I am viewed by my peers or my ability to succeed in my career. Once again, I am facing my fear and will conquer it.

My best advice for young women regarding their fears is to face them. After all, bravery is not the absence of fear. It is being afraid and doing it anyway.