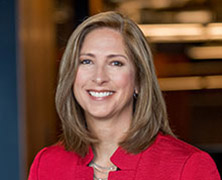 Even if you don’t agree, be respectful – you own your actions.

Janet Brown joined GCG as CIO in 2016, where she leads a team of more than 100 IT employees. Using her considerable IT and business analysis expertise, she quickly identified an opportunity to create a framework for the company’s IT solutions that includes embarking on the creation of a game-changing legal administration platform.

Her expertise and efficiency strategies, coupled with her natural leadership style and humility, have left an indelible mark on the organization. The leadership team at GCG was so impressed with her work, that they recently announced that, in addition to her current role, Brown will also serve as their senior vice president of global application development. In that role, she will oversee application development by teams around the world, and ensure a consistent architecture and software development life cycle.

A veteran of the United States Marine Corps, Brown is also a committed community volunteer. She currently serves on the board of directors for the Little Bit Therapeutic Riding Center in Redmond, Washington.

For Brown, diversity means valuing and respecting the differences that make each person unique. It also means being able to listen to and respect a wide variety of views in order to provide a superior client experience. “The most effective decisions are made when we capitalize on collaboration across the company,” she explains. “Understanding the goals of IT, operations, marketing, legal and compliance enables us to deliver the best result for the company.”

During her career, Brown says she has often made the decision to take on roles that weren’t, on the surface, the most desirable. However, she says it was in tackling those roles that she was able to gain a more diverse set of IT experiences and showcase her skills as an effective leader. She offers other women in the career pipeline this piece of advice, “Be willing to be honest if a project isn’t working and suggest creative fixes or even starting fresh, notwithstanding the people, time and resources invested in that project.”