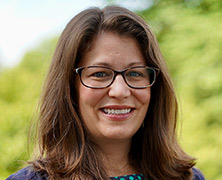 Do what you love and do your best every day, every task. The rest will sort itself out.

Just Mercy: A Story of Justice and Redemption by Bryan Stevenson

Scheduling consultations for insulation, cabinets and windows at the Michigan State Fair and local malls

The Best Advice I Ever Received

The best career advice I ever received came from one of my mentors, when I was a brand-new associate at a law firm and also a brand-new mother. She called me into her office the morning after our first big client meeting together, thanked me for having been so prepared for the meeting—which I stayed up half the night preparing for—and then admonished me to remember that the practice of law is a marathon, not a sprint. It became clear as we grew closer throughout my career that she pegged me immediately as a prime candidate for burn out (and rightfully so).

Her words that morning have helped guide me to not just survive but thrive both personally and professionally in the practice of law. Her perspective and support throughout my career emboldened me to think strategically about the people I worked for and the matters I worked on, rather than just logging as many hours as I could on whatever work came through my door. I thought critically about the type of work I was passionate about and the kind of practice I envisioned building for myself in the next decade. Then, I proactively found opportunities and experiences that would help me build the skills and connections I would need to be where I wanted to be in the long term.

I have repeated those words mentally to myself many times since that morning to keep the idea of sustainability and long-term career development front of mind. This can be exceedingly difficult in a high-stakes, crisis-driven legal practice, such as mine. Sometimes it feels as if all one can do is run around putting out fire after fire. But that’s no way to practice law. The best lawyers are able to step back and see the forest for the trees, even when the trees seem to be on fire all around them. Those lawyers make better decisions for their clients and themselves.

Because of her advice, I have approached my career as a long-term proposition at every step. That has helped me avoid many common pitfalls (not the least of which is burn out, of course) and also steered me toward building a legal practice about which I am truly passionate and excited.