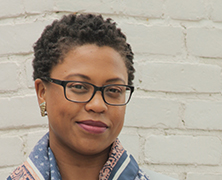 Don’t try to do things on your own. Observe, consult and team up with experts in your field.

Colleagues say Jalana Lewis, a member of the Black Female Lawyers Network, has a special way of bringing disparate groups of people together. Her people skills, intelligence and drive serve her well. Currently, Lewis serves as the access to justice coordinator for a Law Foundation of Ontario-funded project tasked with addressing barriers faced by racialized Ontarians at the administrative tribunal level.

Previously, Lewis was a program manager with the Pro Bono Students Canada National O ce, as well as a campaign manager during the 2016 municipal elections in Halifax, Nova Scotia, where she helped elect the rst African Canadian candidate in 18 years. Lewis recently completed work as chief researcher with the Lord Dalhousie Panel, which was commissioned by the president of Dalhousie University to explore the relationship of Lord Dalhousie, the university’s founder, to racism and slavery.

“As social beings, we learn to be achievers by watching others like us achieve. If we don’t have that experience, it’s di cult to imagine ourselves succeeding in a range of roles,” Lewis explains.

Lewis says this about being included in Women Worth Watching: “I am grateful to be honored alongside so many amazing women. I feel like I’m just starting my career and it means a lot to be recognized for my work. I am fortunate to have some great mentors. I continue
to learn and share my path by mentoring other young women.