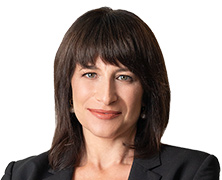 Failure is not an option, but success has many definitions.

As usual, a mystery novel

A flower shop—I was surrounded by blooms all day. It was a life changer.

A Band of Sisters

I graduated from Columbia Law School 20 years ago with a class that was half women, and the idea of a glass ceiling seemed antiquated to me. Gender barriers were alien. The future was mine. Yet two weeks ago, I went to court and found I was the sole female attorney in a courtroom of 27 lawyers. I am a female partner in a law firm that counts 20 percent of its partnership as female—roughly on par with the AmLaw trend.

When I point out this imbalance, I am often told that the practice of law is incompatible with women having children. As a mother of three children myself, with female colleagues who also mother young children, this explanation does not comport with my experience. I know the actual barriers for women’s career advancement are a lack of mentorship, career-building opportunities, confidence in women’s skills and talents, and work/life flexibility. These challenges are real. And, yes, it is frustrating that they still exist in 2019.

At the same time, in the 20 years I have been practicing law, something surprising happened. I became part of a band of sisters—a community of like-minded female lawyers, practicing at the highest echelons of their field and simultaneously enjoying a rich and rewarding life.

We started out as optimistic young women, unaware that there was anything other than a level playing field ahead of us. Over the years, we supported each other to make sure our voices were heard and our achievements recognized. We lift each other up and reach behind us to lift other women up.

We are all too familiar with the indignities that can come with being a female lawyer: being mistaken for the secretary or the court reporter; male opposing counsel telling you to smile in the middle of a deposition; the mediator “joking” that you achieved a favorable settlement for your client by offering sexual favors to your male adversary; and the judge admonishing male counsel against “ganging up on a little girl” when you walk into a settlement conference.

We know that when we walk into a room we have earned our place at the table.

When asked when will there be enough women on the Supreme Court, Justice Ruth Bader Ginsburg famously said, “When there are nine.” If that fantastical dream were to ever happen, I know it will only be possible because of the band of sisters that came before us, that strives alongside us, and that will rise after us.