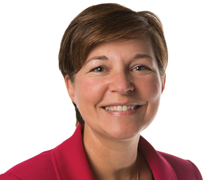 Take everything in stride.

In 1999 I decided that it was time for me to buy my first home in Washington, D.C. My real estate agent, much to my dismay, told me I would only be able to afford to buy a condominium in a neighborhood called Logan Circle. Logan Circle was a place time forgot—it had been one of the neighborhoods destroyed by the riots that ensued after the assassination of Martin Luther King, Jr. in 1968. The riots started north of Logan Circle and swept south leaving fire and decay, drugs and prostitutes in its wake. It was sad. Beautiful turn-of-the-century row houses became dens for criminals, or worse, abandoned and left to rot.

Fast forward to 1999 when brave Washingtonians began to trickle back—lured by affordable housing stock and the bones of a great community. I bought that condo and have loved the community ever since. I will forever be indebted to that agent.

In 2002 I was about to get laid off from my job in the technology sector and hated my commute. When my husband asked what I was going to do I answered, “I am not going to work for a man and I am not going to commute. I am going to open a hardware store!” I’m sure he thought I had lost my mind.

The community association was strong—and diverse enough to never question an inexperienced woman opening a hardware store. Logan Circle needed businesses and I wanted to own one. Someone had to supply all the new homeowners renovating those beautiful old houses.
I learned by trial and error—embraced every community event, block party, and networking opportunity. We hired from the neighborhood, supporting the local recovery clinic which brought me several of the most wonderful teammates a person could ask for. I learned humility, perseverance, and to celebrate the positives in each day.

We also learned to listen to everyone who walked through the door. If a customer had a tip or a suggestion for a new product to carry or service to offer, we listened to them. We started receiving calls from neighborhoods all over the city that wanted a hardware store. They asked if we would open on their commercial block—it was flattering, but also led us to open eight more locations. I think a lot of our success has come from our ability to listen. I plan to keep on doing that.

My late district manager from Ace Hardware was the first person to truly believe in my ability to open a store. He looked past my lack of hardware experience and never once questioned a woman’s ability to succeed. I have carried this forward in our hiring practices. Many of our new hires do not have hardware experience, but we look for a spark—maybe a smile or a great personality—that allows us to see what someone can become under our guidance.

There are many stereotypes in the home improvement/hardware field that my female team members and I face. We love to prove someone wrong when someone asks, “Is there a man who can help us?” It is a constant educational process that has not changed much in the ten years I’ve been in the field.