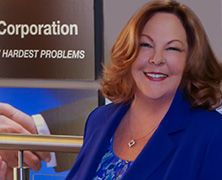 BSBA and MBA, both with IT concentration from University of LaVerne, LaVerne, CA

During her 39 years of service in support of the L-3/IEC Fleet Ballistic Missile program, Gina has served in several positions in engineering support, logistics management, application software development and field technical support, and program management. In 2006, she became vice president and general manager of range and test solutions, and retained that P&L responsibility until her promotion to president of Interstate Electronics in 2013.

As a divorced single mom reentering the workforce, Gina took on challenges that would shape her career and leadership style. “I went from administrative work to electronics work in a predominantly male-dominated workforce—it was a real career leap,” she said. “I learned that overcoming fear is the key to learning and growth. Trying new things brings opportunity. There is always something better just over each hill we climb.

“While in the early days of my career it was uncommon for females to work alongside male military and field engineers, what I found was that if I didn’t make a big deal of it, neither did they,” said Gina. “I’ve had great support from both men and women as I have evolved in my career.

Gina earned a Master of Science in business administration (with a concentration in information technology) from the University of Laverne.

She is an avid supporter of the Orange County United Way (OCUW), a member of the Tocqueville Society, and volunteers for the OCUW’s Women’s Philanthropy Fund.

The most important quality a woman leader should have is…
…maintaining composure in a crisis. This is key for any leader, but especially important for a woman, as it projects strength and fosters confidence that she has everything under control. It also helps to keep the productive part of the brain working for problem solving.

The career advice I’d give my former self:
Chart your path a couple of times a year. Know where you want to be in one year, two years, five years. It helps you make more strategic choices in your career path.

Words I live by:
“This too shall pass.” This is an aphorism I got from my mother and passed to my daughter and my teams to help them maintain a healthy perspective. Every challenge passes—as does every glorious victory. A sense of this ebb and flow allows us to help stay balanced.

The one thing I’d do differently in my career, knowing what I know now, is…
…embrace early the techniques of constructive conflict and change management. Each has a continuum of positive and negative attributes and provides the opportunity to develop the skill sets to deal with the unexpected.

When I really need to focus on a project, I…
…rely on my training from Hyrum Smith (founder of Franklin Quest and the Franklin Day Planner) for making lists, setting priorities and delegating or deferring anything that impedes progress on the project at hand.

My biggest career leap (and what I learned from it) was…
…I went from administrative work to electronics work in a predominantly male-dominated workforce when I reentered the workforce as a divorced single mom. I learned that overcoming fear is the key to learning and growth. Trying new things brings opportunity. There is always something better just over each hill we climb.

Being a woman in my profession has been…
…mostly irrelevant. I’ve had great support from both men and women as I have evolved in my career. While in the early days of my career it was uncommon for females to work alongside male military and field engineers, what I found was that if I didn’t make a big deal of it, neither did they.

I’ve learned that failure is…
Failure is a critical component of learning and developing one’s confidence. Failing reminds us we are human and builds our compassion for others’ failures. Surviving and thriving after failures is how we become fearless. I also learned that making the wrong personal choice doesn’t necessarily change your destination; it might just change your arrival time.

I maintain a healthy personal life by…
…balancing work and family. My husband and I have an RV and are able to squeeze in weekends at California beach state parks where we golf, bike ride and walk our dog. My family is my support network, so time with my husband and daughter are my energy boosters.

I knew my present career was what I wanted to do when…
…I had my first team to manage. I love working with people, learning to unlock their potential as individuals and collectively as a team. Helping to build their confidence and trust in themselves and each other is very rewarding. I like the way this can be applied to fixing broken processes, programs and businesses.