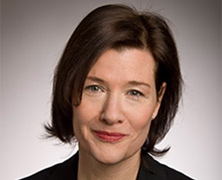 Always – always – push for the biggest, boldest, most cataclysmic and new idea imaginable. Ideas that break the boundaries of what’s possible.

Gail Heimann has pushed the boundaries in the public relations industry for more than two decades. And as president of Weber Shandwick, she’s accelerated innovation and expanded the company’s reach far beyond traditional PR. Heimann was instrumental in the development of Mediaco, Weber Shandwick’s pioneering branded content arm, and has driven the firm’s evolution from a PR firm to a full-fledged marketing services agency, now recognized as a leader in integrated marketing. Her keen insights and creative talents have been a catalyst for brands like Mattel, Unilever, Mondelez and General Motors.

Heimann has led several conversations on pressing industry issues, from digital diversity at Advertising Week to gender equality at the Cannes Lions International Festival of Creativity. In 2015, she was a member of the inaugural Cannes Glass Lions jury, recognizing work that breaks down gender bias. Heimann was inducted into PRWeek’s inaugural Hall of Femme in 2016, celebrating women who challenge the status quo. She also serves on the board of the PR Council and The LAGRANT Foundation, which works to increase diversity in advertising, marketing and PR.

“My mother believed that women should work to achieve whatever they want and can for themselves and their families. That belief is deeply ingrained in me. If you want something, vocalize it. It doesn’t have to be a battle.” She continues, “There always are, and always will be, obstacles. However, each challenge makes you think differently. It makes you grow. It makes you better.”

Heimann says she always believed that she could obtain whatever she wanted, if she had passion for it.

“I think a true leader has unwavering passion for what they do, for the high highs and for the low lows, and they inspire those around them to push forward no matter the circumstance. I try the best I can to walk-the-walk and lead by example.” She feels proud to be part of the leadership team that helped build Weber Shandwick into the force it is today.

When it comes to diversity and inclusion, Heimann feels it is the engine of change, growth and success – for businesses, individuals and society. “It’s a nonnegotiable – not only in the working world, but in our everyday lives,” she states.