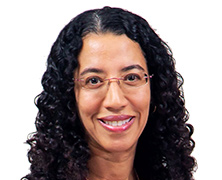 Be kind. Treat others the way you want to be treated.

The Lost Man by Jane Harper

Don’t Let Bias Push You off Your Path

Women of color are historically underestimated and discounted until they have proven themselves. It is unfortunate, but women of color often have to work twice as hard to be taken seriously.

In my experience, as a woman of color in the legal profession, the key is to get beyond the initial (somewhat) awkward moments, find something you have in common with a colleague or a potential new client, and build on that. Once you can get someone to appreciate the similarities (same school, hobbies, kids, etc.) and get to know you, the differences in skin color and gender fade from being a focal point, and the person is able to appreciate your qualifications and expertise.

It is important to have a positive attitude and thick skin. If you anticipate the negative and aren’t able to handle criticism (warranted or not), it can be difficult to be successful in the workplace.

You can never know someone’s story, by just looking at them. As an immigrant to the United States, the notion of racial and gender bias was at first completely foreign to me. I soon realized that many were not as “color-blind” as I was.

Being born and raised in Suriname, a tiny country in South America, with a population of about 550,000 and Dutch as its official language, was an awesome experience. I am also the daughter of teacher parents with mixed ethnicity. In fact, Suriname is an incredible melting pot, with immigrants from India, Indonesia, China, Portugal, and Lebanon, as well as descendants of former slaves from Western Africa, predominantly Ghana. In my family alone, I have blond, blue-eyed Dutch first cousins on one side (dad), and dark chocolate-brown, half-Chinese first cousins on the other (mom).

I grew up essentially “color-blind,” and was taught to value people for their character and attributes, not their gender or skin color. In addition, the highly educated “dark side” members of my family were mostly engineers and doctors, while my white dad was the first person in his family to attend college.

Growing up, it simply never occurred to me that I could not accomplish what I set my mind to or that others would doubt my capabilities. I have learned that is not true, but it never took me off my path to reach my goals—a successful life and career that I am proud of and cherish.